Mr. Bojangles and Bruce Davidson, Sr. winners of the USEA YEH East Coast 5 Yr Old Championships. Photo by Sarah Connell-Spriggs
Fair Hill NRMA, MD - It was a beautiful crisp fall day at the USEA Young Event Horse (YEH) Championships at the Fair Hill International Festival in the Country, but perhaps the day was most beautiful for Mr. Bojangles and his rider Bruce Davidson, Sr.  The Davidson homebred Thoroughbred owned by Buck Davidson and Carl Segal showed ample future potential throughout the competition.
Mr. Bojangles and Davidson found themselves in the lead after a lovely Dressage test and a solid showing in the Conformation phase of the YEH Five-Year-Old Championships.

While Friday’s 43.35 jumping score was not the highest of the day, it was more than enough to solidify his cumulative point total to win on a final score of 82.53.  In the words of judge Susan Graham White, “[Mr. Bojangles] had a lovely Dressage ride, forward, fresh, which showed off his gaits”, while his jumping exhibited his “quickness from behind, and scope.”  The highest jumping score of the five-year-olds, a 43.95, came from the 2012 USEA YEH East Coast Four-Year-Old Champion Esccord RGS (a.k.a. Garth). Garth is a Hanoverian bred by Page Brook Farms by Escudo I out of the dam EM Arabella RGS, and ridden and owned by Katie Murphy.   Their superb jumping performance enabled Garth and Katie to finish the competition as the reserve champions in the division.

In the Four-Year-Old Division Championship, two horses bred by Dr. Laurie Cameron of Clear Blue Farm in Stockton, NJ proved themselves to be the top mounts.  Rider Lillian Heard won the Championship aboard Cameron-bred Quarlotta, an Oldenburg by the stallion Quite Capitol out of the mare Merging.  Then, Cameron-bred Early Review, a Hanoverian by the sire Earl out of the dam Lois Lane, received the Safe Harbor Award.  That award is given to a horse that the judges view as exhibiting the most graceful and rider friendly performance throughout the competition.  As a "small time" breeder, Dr. Cameron noted that it is “very exciting that the YEH is now a part of the USEA record on these horses…hopefully more people will be riding American bred horses in the future.”


Breeders, owners, and competitors had a sense of optimism regarding the quality of the field of YEH entrants in the competition this year.  Marilyn Payne, the Chair of the USEA’s YEH Task Force, noted that there was not only a “phenomenal number of horses” but also the highest “quality of horses” that they have seen at a USEA YEH Championships to date.

She attributed much of that success to the lure of the Holekamp/Turner YEH Lion d’ Angers Grant.  The grant, made possible through the work of Timothy Holekamp of New Spring Farm in Columbia, MO and Christine Turner of Indian Creek Farm in Spring Branch, TX, supports costs associated with competing the highest scoring USEA YEH Champion as a 7 year old at the FEI World Young Horse Championships at Le Lion d’Angers in France.

The owners of Mr. Bojangles will now have to wait on the results of the USEA YEH West Coast Championships taking place later this month at Galway Downs in Temecula, CA to see which of the YEH Champions will have the highest score to be awarded the grant.

Many thanks to Maddie Blackman for sending in her Plantation wrap up and plans for the finish of the 2013 season.  We plan to keep our blog and Facebook page lively with updates....so stay tuned!!
"Plantation was a great weekend all around. I had both my horses competing, Gordonstown and Khoi Traveler.

"Gordy" started the weekend out by doing his last prep before Fair Hill in the Advanced division.  His dressage was ok (as it usually is), maybe a little less opinionated than usual, which was refreshing. He show jumped in lovely form and had an unlucky rail, but was double clear XC for a very exciting finish with 7th overall.   Our eyes are set in Fair Hill now!
"Khoi" was competing in the one star that weekend. He had a very steady dressage and a great SJ round with just one rail.  Around noon he went out XC and put in a double clear, so I was very excited to have this horse go so well, as we are still getting to know each other.   He is just getting better and better with each event and has such a bright future!  Khoi's plans include the prelim at the NJ horse park before finishing the year at the VA horse park before moving up to intermediate. 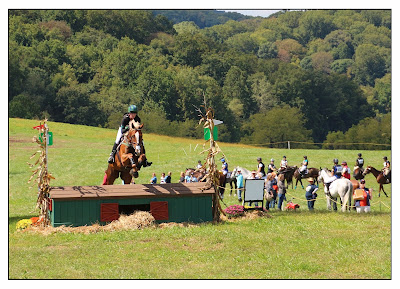 It was so nice to be on home turf and to have all of us from Chesterland there to support and help eachother over the weekend.  The best part was having both my Mom and Dad be able to watch Gordy go on Saturday. They are such big supporters and it was nice to share  such a great day with them!"
Posted by Lisa Thomas at 9:29 AM No comments:

Kelly Prather Impresses in the Prelim Futurity at PFI!


We've been able to catch up with another resident BDE rider, Kelly Prather, who's relocated from the west coast to be based out of Chesterland as well. Kelly and several of her young Chesterland bred horses had a very good showing at the recent Plantation International Event!

"It was a very good day for all 3 horses at Plantation Field, with all performing well in dressage, with only a couple of minor mistakes, still I was very happy with them. Show jumping was the biggest, brightest international ring with cars and decorations which none of them had seen, and they still performed very well. It was a challenging course with lots of turns and technical questions.
Truly Wiley, one of Bruce’s homebreds out of his Irish TB mare “Tears of a Loss” by “Salute the Truth”, jumped a great round. We had 2 unlucky rails but overall he jumped really well. Both he and St. Laurent, who's owned by Valerie Mackey, had fantastic X-C rounds. Truly Wiley placed 5th and St. Laurent was 8th in the Prelim Futurity.
Flagmount’s Nightcap, aka “Simon”, is another of Chesterland’s homebreds out of Bruce's “Memorial Cap” and sired by Flagmount Freedom, won the Prelim Futurity going double clean in both the challenging show jump and XC courses!
Thanks to Charles Owens and Dover Saddlery for their great gifts and sponsorship of the Futurity Division."

Just received a recent email from Annie Eldridge, a friend and breeding client who splits her time between Duxbury, MA and Southern Pines, NC.

We were able to catch up with Annie recently while she was down to watch all the action at Plantation Field International, and then schedule a visit over at Chesterland to see Charlie and all the young horses.
Annie is a lifelong horse woman who competed in 3 Day Eventing until an unexpected illness sidelined her from getting in the tack.  She continues to work on her recovery while being a huge supporter of the sport, whether it's cheering for her hometown rider, Ariel Grald, or continuing to breed and produce classic sport horses!

Annie has one Charlie colt on the ground and one due in 2014.  Here is her gorgeous colt at 5 months.

"I have been running a small breeding program for 7 years but I have never seen a weanling that looks
this strong and handsome at such a young age. His mother, Fabulous Jada, is a beautiful,
sweet, talented TB with excellent bloodlines, and of course Keltic Lion is his sire, so I'm calling
the colt "Fabulous Lion" with the nickname of Lion.

The colt was so stunning, even as a tiny foal, that I had an easy choice picking a sire for Jada's next baby ... I bred her right back to Charlie.  So, how lucky am I -- I have another Jada/Charlie baby on the way ,May 2014 (fingers crossed,always)." 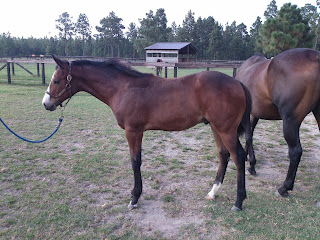 "My Lion is so sweet and friendly that he practically crawls into your lap when you visit
him. He is loving and kind and such a beautiful, athletic mover, even as a weanling! So I am
absolutely thrilled to have this wonderful colt as a "Setters' Run Farm " (SRF) homebred. I
am lucky that he wil be raised, as are all my homebreds, under the careful guidance of
Mona  Gardella at Rough Diamonds Farm in Aberdeen, NC -- Mona specializes in breeding and
she just has a magic touch when it comes to raising foals.

My heart is broken because I cannot ride now due to illness but I am working hard to recover and my new  goal will be to ride Lion someday!"  ~ Annie Eldridge, Duxbury, MA and So. Pines, NC

Thanks so much to Annie for sending in this recent update and good luck in your continued recovery.   We love to hear from our Chesterland friends and can't wait to see keep track of both youngster's progress!!
Posted by Lisa Thomas at 8:22 AM 1 comment: