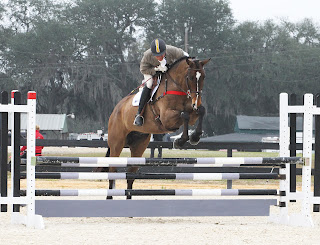 Bruce has a new ride on a fantastic young horse named KER Marvin, who is owned by his friends at Kentucky Equine Research.  Those around the barn like to call this young horse "Everest" for obvious reasons, as he is a magnificently large young thoroughbred, who has led quite an interesting life thus far. 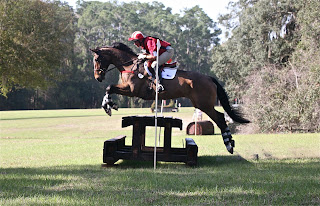 KER Marvin was purchased by Kentucky Equine Research in September 2006 at a public Thoroughbred sale as a yearling. During his tenure as a research horse, he was involved in digestibility and exercise physiology trials. He also was used in the development of KERx products DuraPlex and Nano-E. By all accounts, KER Marvin was a great research horse!
In the summer of 2010, KER Marvin was one of several research horses used in the filming of the Discovery Channel’s hit television series “Dirty Jobs” at Kentucky Equine Research.
Later that summer, he was transferred to the sport-horse division of the company to pursue a career in eventing.  This season he has joined Bruce's line-up of top competition horses & it will be fascinating to watch "Everest" take on the eventing world! 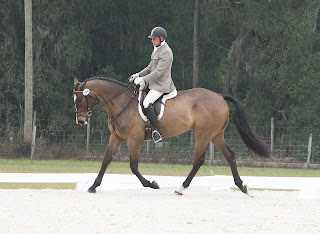 Kentucky Equine Research (KER) is an international equine nutrition, research, and consultation company serving both the horse producer and the feed industry. Its goal is to advance the industry's knowledge of equine nutrition and exercise physiology and apply this knowledge to produce healthier, more athletic horses.
KER was founded in 1988 when Joe Pagan, Ph.D. realized that information generated from research was not disseminated to the individuals who needed it most: feed manufacturers and horse owners. Since the company began, filling that void has been a priority for KER.
The company accomplishes this in several ways. First and foremost, it serves as a consultant to feed manufacturers. KER nutritionists work with mill owners and managers to formulate top-quality feeds that complement typical forages found in the locale. KER works with feed manufacturers on six continents: Australia, Asia, Europe, South America, Africa, and North America. KER also produces a line of nutritional supplements for special needs horses.
Find out more about KER at www.ker.com and visit KER’s online equine library at www.Equinews.com.
Posted by Lisa Thomas at 7:06 AM No comments: