Recent post on Boyd's website regarding several of the Walker's new horses, including Brewster, one of Bruce's own home bred talents!  An excerpt from the blog is below & you can click here for the full story! 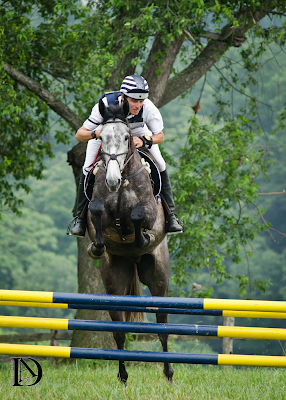 Brewster, owned by Katie and Cuyler Walker. Photo Copyright Amy K. Dragoo
The second horse the Walkers purchased is Brewster, a brilliant-looking 4-year-old bred by none other than Bruce Davidson. This horse is about 1/16th Irish Sport Horse and is closely related to one of Bruce’s most famous eventers, Eagle Lion. Dave Leinhauser also got this young horse started over the winter, where Brewster got his education in the hills of Unionville, PA. Brewster has had a couple of starts this year and the horse has looked very impressive at the novice horse trials.
Posted by Lisa Thomas at 2:07 PM 2 comments:

Catching Up with Bruce

I had a chance to chat with Bruce last night after his exciting win on Keltic Lion this past weekend at Fair Hill!  When I asked him about their weekend, he immediately went to how proud he was of David and his efforts on Looks Sweet and their 2nd place finish in the Open Intermediate!


Charlie (Keltic Lion) was just fantastic, and even with a small mistake in the dressage, and a XC round which he didn't press for time, he still came out on top.  He is such an impressive and well mannered stallion who is a total gentleman in the barn and a real contender for the future!  Bruce was also quite pleased with Here's Lola who was 4th,  with Bruce taking all the blame for the rail down & break in the dressage.  In addition, HRH Patricia, who was sold to Emily Beshear's barn, was 3rd on the weekend at FH & also at Loch Moy at the Training Level!   See Fair Hill Full Results
Up next they will go off to Richland with both Prelim horses (Charlie & Lola), and David will take his young horse Look at Me in the Prelim as well.  Looks Sweet will move up to Advanced after such a successful weekend at Fair Hill.  Plantation will be on the docket for mid September and then it's back to Fair Hill International in the beginning of the fall.
The Eventing Issue of the Chronicle also gave the Chesterland crew their fair shake of the media.  On page 24 there is a full 4 page spread titled "Bruce Davidson's Chesterland - BehindBarnDoors".   If you are a magazine subscriber, you will be able to access the online magazine here, with your login & password!  Many thanks to our friend Amy Dragoo for the amazing pictorial spread on the farm!!
There is also a wonderful 5 page article (page 38) on David's Mom, Vicky Koss, and her "Horse of a Lifetime: Goldmill" with a full page picture of the pair riding at Badminton, plus a great galloping shot of Goldmill and David during their partnership which helped teach David the ropes of eventing at the age of 17.   David's quoted as saying, "I don't know that I would have started riding if it wasn't for Barney.  But he was so great to ride cross-country, and we had so much fun".  David rode Barney at his first 3 day event & even was able to experience the long format back in 2004.  Barney really gave the Koss family his heart until he was euthanized at the age of 19 back in 2006.
It does seem that David has become a solid fixture at Chesterland, and the plans are for David to stay on to spend the winter down in Ocala, and to help bring along the now 7 headcount of coming 4 year olds, 2 of which belong to Vicky Koss.  Looks like Bruce and David are going to have a busy winter!!
Posted by Lisa Thomas at 4:28 PM No comments:

PRINT SHARE
When Amy Dragoo, one of our most reliable freelance photographers, sent in her selections for our Behind Barn Doors at Bruce Davidson’s Chesterland (see Aug. 8 Eventing Issue, p. 24), we weren’t surprised by most of what we saw.
There were the rolling, green hills of Chester County, Pa. There were the classic red-and-white Dutch doors on his barn, the old black-and-white photos of famous mounts from decades gone by hanging in his office. There were all the horses and dogs and chickens and peacocks and parrots we’d expected...
Wait, what? Bruce Davidson has… birds in his barn?
“Oh yes, I’ve always loved birds,” he said matter-of-factly when I called him to make sure that neither my eyes nor Amy’s Photoshopping skills were deceiving me. “I’ve always had them around the farm.”
In fact, chickens and roosters have been commonplace in Davidson’s life since childhood. He grew up in Westport, Mass., right down the road from Adamsville, R.I., where the Rhode Island Red chicken breed was established, so they’ve always had a place at his farm.
“I love brown eggs, and they’re pets,” he said. “The horses like them and like having them around. It’s amazing to see how many of the little roosters and bantams attach to a horse and really become that horse’s friend. They’ll even learn to rest on that horse’s back. JJ Babu [who carried Davidson to the 1983 Rolex Kentucky CCI*** title and a team gold medal at the 1984 Olympic Games] had a little rooster forever that went everywhere with him, and he loved it.”
But chickens are far from being Chesterland’s only feathered residents. Davidson also has two peacocks that run free on the farm and a yellow nape Amazon parrot named Lolita who lives in his tack room. At one time he had 27 different varieties of fowl, including golden pheasants.
But bird ownership isn’t all fun and games. With Chester County’s fox population plenty healthy, bird snatching is a common problem. Davidson said the intruders are bold enough to come right into the stable and steal a snack if he’s not careful. And what of the winter months?
“We have chickens in Florida, so each year a couple of them come down with us, and each year a few come back with us,” said Davidson, who spends the coldest months in Ocala. “They just go in the horse trailer with the horses, and everyone’s happy.”


If you enjoyed this article and would like to read more like it, consider subscribing. "Five Minutes With Bruce 'The Bird Man' Davidson" ran in the Aug. 8, 2011 issue. Check out thetable of contents to see what great stories are in the magazine this week.
Posted by Lisa Thomas at 7:14 PM No comments:

We've been in contact with Lusty's new owner, Whitney Weston, to get an update on Lusty and their new partnership.  They had a great run at Rebecca Farm and I've made a slideshow of some of her photos, as well as attached a great interview by our friends at Eventing Nation.  This pair clearly has a great future together!

By Samantha L Clark on July 24, 2011 11:05 AM, Filed Under SamanthaLClark.com
I think taking on a four star ride from a top level rider must be one of the hardest things to do in eventing, so I was interested to see Rock on Rose go this afternoon when I saw her name in the programme in the intermediate division.  When I spoke to Bruce Davidson about a month ago, he'd mentioned how well Lusty was doing, but hadn't gone into any further detail. Happily, it seems Lusty has certainly landed on her feet with a new owner, Whitney, who couldn't possibly love her any more. They posted a lovely clear around the intermediate track this afternoon here at Rebecca Farm to add just six time penalties to their dressage score, and Whitney kindly talked to me after her ride.
FULL ARTICLE & VIDEO

iPhone Gallery
Posted by Lisa Thomas at 8:05 AM No comments: